In a video, uploaded to social networks, the imbecile takes shots without consideration that people are traveling on the public street, including other motorists

In a video circulating through social networks, a man is seen driving a vehicle and firing onto the public highway with no consideration for other travelers or pedestrians.

Apparently, the recording was made by a woman who says “we are playing roulette” and accompanies the individual who also asks to be filmed while shooting.

It isn’t made clear on which avenue or highway of the Dominican Republic they travel. In the video, two other voices are heard, which appear to be two more people accompanying the couple in the front.

Something similar went viral on the networks when the young Randy Reyes Marmolejos did the same. Reyes Marmolejo was later arrested. He was given three months of preventive detention as a measure of coercion. 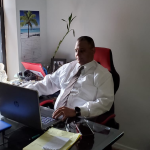